ERIN - Speaker of the Mihn'D 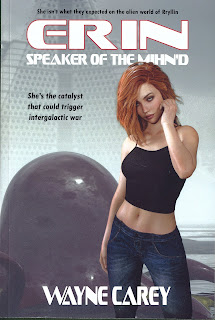 ERIN – Speaker of the Mihn’D

Writer Wayne Carey has an uncanny affinity for old fashion sci-fi tales reminiscent of all those great paperbacks of the 60s and 70s. In his latest, “ERIN-Speaker of the Mihn’D” he creates an amazing off world adventure featuring a sarcastic, self-centered teenage girl as his protagonist. In this future, the world has encountered alien races and established political relationships with the Yyrrlaar who inhabit the planet Ryllin. When Erin’s estranged father dies on Ryllin, the American Diplomatic Corp request Erin travel to the alien world to represent her family at his funeral.

Once on Ryllin, Erin discovers there are two other sentient life forms living there. The Drac of massive lizard like beings with engineering talents and the Mihn’D, a race of round goo-like creatures considered nothing more than simple animals who take care of the planet’s natural environment with their farming skills. At first all seems straight forward and Erin hopes once she completed her task of attending her father’s alien funeral, she can return to Earth and become celebrity as the first ever human teenager to visit an alien planet.

Things go awry when she is kidnapped by a group of Dracs and renegade humans who claim they were abducted from Earth hundreds of years earlier by the Yyrrlar who are not as peace loving as they claim. Then she learns from her Drac kidnappers that they were the first inhabitants of Ryllin and are being Ryllin and are being subjugated by their Yyrrlar overlords. And if that wasn’t enough to confound any young woman, Erin is approached by strange Mihn’D and is touched by one of its malleable tentacle after which she discovers she has been physically altered by the contact. The alien being has infected her bloodstreams with millions of micro-creatures giving her both telepathic abilities and extraordinary physical stamina.

When the Dracs begin a war with the Yyrrlar, Erin finds herself caught it the middle. Possessing the information that will forever alter the situation, she also becomes a target of those factions who would prefer to maintain the status quo. And thus Carey spins a fantastic tale of unbelievable imagination that is almost impossible to put down. His sci-fi storytelling reminds of such classic writers as E.C. Tubb, Ed Hamilton and Robert Heinlein. To that end, “ERIN – Speaker of the Mihn-D” is a book you do not want to miss.