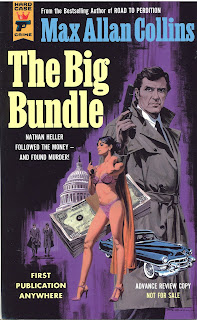 This is the 20th in the Nate Heller historical crime series by Collins. If you are unfamiliar with them, the conceit is simple enough. Collins, either working alone, or with other collaborators, researches an actual American crime and then drops his fictional private eye into the tale as either an investigator or actual participant in the events.  In this case, he becomes both. The story revolves around the 1953 kidnapping of young Bobby Greenlease of Kansas City. The six year old was the son of Robert Cosgrove Greenlease Sr, a multi-millionaire auto dealer. His kidnappers were paid a ransom of $60,000, the largest ever paid out in American history at that time.

Collins splits the book in two parts. The first has Heller hired by Greenlease Sr. to help find the kidnappers and rescue his son. We’ve always admired Collin’s ability to empathize with his characters and that is never more evidenced than here. Believing the boy is already dead, after finding Hall, Heller’s emotional restraint is nothing short of painful as his desire to blow away the scumbag killer is kept in check with having to learn the truth. His portrayal of Carl Hall is both deft and creepy at the same time.

At the time of the couples’ eventual arrest, only half the money was recovered.  Five years later the mystery remains as to where it went and who ended up with it. Reporters and police investigators suggested the funds had been laundered through organized crime and ended up in Jimmy Hoffa’s Teamsters Union Fund. Thus Greenlease Sr. once again hires Heller; this time to find out where it went. Not because he needs the money, but is sickened by the thought that unknown lowlifes profited from his son’s abduction. Like his previous Heller books, Collins skillfully weaves his protagonist through the documented historical facts having him cross paths with such players Hoffa and Bobby Kennedy.

“The Big Bundle” is classic Max Collins, that alone should have you pre-ordering it. Of all his Heller novels to date, this one will leave you feeling as if you’d been sucker punched. Since the Garden of Eden, evil has existed in our world. In 1953, it reared its head tragically.

A final note. We rarely mention of the covers of books we review. Hard Case Crime is one of the few publishers out there that always delivers stunning paintings reminiscent of the early 50s paperbacks. Paul Mann does the honors on this title offering up a Nate Heller who looks a whole lot like the late actor Robert Lansing. What we’d call brilliant casting, Mr. Mann.