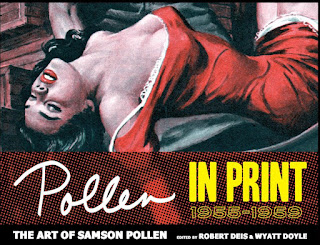 With this book, Men’s Adventure Magazines historians Robert Deis and Wyatt Doyle once again shine a light on the amazing, and prolific work of artist Samson Pollen. In the two previous volumes, “Pollen’s Action” and “Pollen’s Women,” the authors focused on those particular themes that were the hallmark of the artist’ majority of published work. In this, their third collection, they turn their critical eyes to Pollen’s smaller black and white illustrations that appeared in those periodicals.

This is no easy task, as many of the wonderful illustrations they reproduced were from tiny originals no more then three or four inches in length and width. What generally happens when attempting to reproduce such small pieces is the disintegration of the line work when enlarged. Yet, somehow, they have deftly manipulated the digital scanning progress to prevent such from happening and the end result is clear, beautiful copies detailing the mastery of Pollen’s composition and shading skills.

Another noteworthy element in this volume is that unlike all their previous titles, this one was crowd-funded on-line. I.e. it was produced by the generous donations of art and MAMS lovers around the world. This in itself is a testimony to both Pollen’s work and the legion of fans the authors have increased by their tireless efforts in preserving these artistic treasures for future generations. We heartily applaud them both and encourage all of you to pick up this gorgeous book.