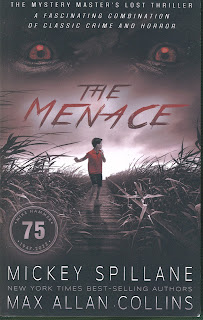 This book is a gem in that it actually contains three different works by the indisputable master of private-eye fiction, Mickey Spillane. The first is a novella based on a television script and adapted by Collins. The second is a long lost short story and the last a non-fiction true crime essay based on an actual murder case. All three are memorable in their own way and combined, offer up a small glimpse of the unbounded talent and imagination Spillane possessed.

“The Menace” itself is a thriller regarding a grotesque serial killer targeting doctors in small southern county. Sheriff Cutter, a veteran of the NYPD, puts the pieces together and discovers the killer’s next victim is a likeable pediatrician and his young son. Yet despite surrounding the doctor and his family with a cadre of officers, Cutter soon learns his monstrous foe is not going to let anything deter him from his savage goal.

“The Duke Alexander” is a hilarious tale of mistaken identity. A garage owner is on vacation when he is crosses paths with an exact look-alike who happens to be a foreign gigolo in this country to marry a wealthy debutante. Honestly, Spillane’s comedy is worthy of a Marx Brothers feature. It is that funny.

Finally, Collins wraps it all up republishing a short true-crime essay wherein a young woman’s body, left at the bottom of freezing cold lake, eventually rises to the surface and kicks off an investigation, which via the science of the day, eventually tracks down the killer.

Three for the price of one sums up “The Menace.” A satisfying fun read you don’t want to miss.