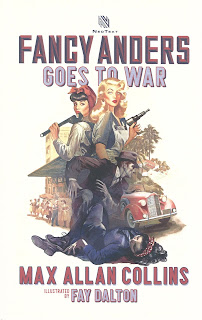 During World War Two, so many of America’s sons went off fight a war, it fell on America’s daughters to keep the homefront afloat. Now for those mothers and wives living on farms and ranches, none of this was new as they already knew what hard labor was all about. Whereas their city-cousins who had only punched a clock behind a store counter or handled a typewriter, they were not at all prepared for the noisy, sweaty, production factories they were required to keep working. The war effort needed lots of planes and tanks and lots of other vital military equipment. Thus in the thousands these gals put aside their lipsticks for head scarves, high-heels for work boots and rolled up their sleeves to do their part. Thus was born Rosy the Riveter.

Considering the five long years the war lasted, we’ve always been amazed that Hollywood for the most part has ignored this phenomenon of a woman dominated America and only given us two major productions centered on the period. The first being the horrendous 1984 “Swing Shift” directed by Jonathan Damme and starring Goldie Hawn and Kurt Russell. Its intentions might have been good, but the story was bland and boring. As for the second, we’ll get to that eventually.

Now mystery writer Max Allan Collins has turned his always active imagination to that subject matter in “Fancy Anders Goes To War,” and delivers a short, fun and exciting tale debuting a wonderful new character. Francine Anders’ father operates a private investigation business out of Los Angeles. When he is called away to Washington to help with the establishment of the military’s new intelligence department, he leaves Fancy behind to manage the office. What he assumes will be simple record keeping and maintenance stuff.

What Anders senior couldn’t foresee was the death of a young woman at the Amalgamated Aircraft Factory.  Although reported as an accident, the owner of the firm has suspicions to the contrary. Being a good friend of the family, he suggests that Fancy investigate. With the help of a city detective, she agrees and soon goes undercover as a new employee. Once again, Collins sets the stage with detailed historical accuracy as Fancy finds herself working with other patriotic, self-sacrificing women unafraid to get their hands dirty and willing to take on any job that will help America win the war. Yet working side by side with these women, and their male supervisors, might be a murderer. Fancy’s challenge is not only to uncover the killer but at the same time the motive for the crime.

It’s a dandy mystery and Fancy and her friends are wonderfully realized. We’d also like to tip our pulp fedora to artist Fay Dalton who provides not only a great colorful cover but some equally beautiful interior illustrations. Something we don’t get enough these days. Finally, we did mention there was a second movie about women during wartime; Penny Marshall’s delightful “A League of their Own” starring Tom Hanks and Gena Davis. Which only makes us wonder if maybe Fancy might return in a sequel? “Fancy Anders Strikes Out” has a nice ring to it, don’t you think?
Posted by Ron Fortier at 4:04 PM