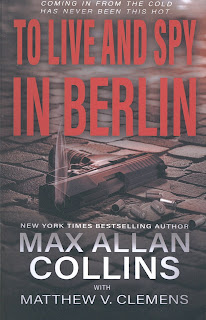 With this third installment of the John Sand series, Collins and Clemens put forth a proposition many past mystery writers have tackled; can marriage still be romantic and sexy? Following the events that were detailed in “Come Spy With Me” and “Live Fast, Spy Hard,” former British Agent John Sand and his Texas Oil Heiress wife, Stacey, have together joined the new international spy organization called GUILE created by U.S. President John Kennedy and run by former British Spy Chief Sir Lord Malcolm Marbury; known affectionately as Double M.

As we rejoin the Sands, the major issue between them is whether or not Stacey becoming an operative was a good idea or not. A series of lethal encounters with a team of professional assassins has John rethinking his decision. At the same time certain intelligence comes to the surface that former Nazis who escaped capture at the end of World War II may be active in Berlin, after having disappeared for several decades in certain South American countries. Bomb making uranium has been stolen and the likelihood of these renegade Nazis creating their own atomic bomb is a threat that cannot be ignored.

As in the first two entries, Collins and Clemens cleverly work in actual historical settings throughout the thriller, weaving their fiction skillfully around real people and the volatile political atmosphere of the early 1960s. Yet despite this outer layer of narrative, it is the relationship between John and Stacey that is truly captivating. It was impossible not to recall other literary and cinematic spouses from the past. From Nick and Nora Charles, to televisions Hart to Hart and McMillan & Wife, married duos sharing outlandish adventures worked remarkably well in the past and they are very much the pedigree of this thrill-a-minute new series.

As always, Collins and Clemens offer up a whole lot more than any back cover blurb can properly define. This series is brilliant in all its many aspects. If you’re a spy junkie like us, its time you met the Sands.