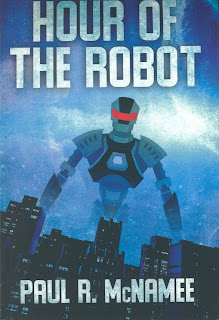 This sci-fi actioner begins when an advance scout ship from an alien empire arrives in orbit around the Earth with the intent gathering data for an invasion. As it turns out, one of the three members of the crew rebels at the idea of conquest and sabotages the mission at the same time stranding himself here. Seven years later, this castaway has become a superhero to the people of the great city Palas simply referred to as the Alien. His secret lair is managed by an intelligent robot of his own design called Robot.

Writer McNamee clearly spins his tale from the iconic comic book mythos of the twentieth century. Whereas the Alien is another version of Superman, in the nearby dark brooding metropolis of Crowsport (re-Gotham) a masked crimefigther named the Protector has taken to cleaning up the street aided by his firecracker of a lovely sidekick, a young lady called Understudy.

But what are heroes without villains? And in this case, we immediately learn of brilliant genius called Mr. Medina and a cruel, thuggish mob boss called Dufresne. Together they are forever hatching various get rich schemes to acquire wealth and power. It appears the forces are good and evil are equally balance until the Alien uncovers clues of a mysterious third party’s involvement. This unknown element could prove the most dangerous threat the planet has ever encountered unless Alien and the Protector then discover its identity and goals.

“Hour of the Robot” is a terrific first novel and a fun read.  McNamee’s prose is succinct in its brevity detailing the action clearly throughout without wasting so much as a single word. He tells you his story without fancy trappings while at the same time drawing forth really wonderful personalities from his cast of characters. Though based on all too familiar themes, “Hour of the Robot” is really something fresh and exciting and a bravo first novel of a very skillful storyteller.  Honestly, we want more. Lots more.