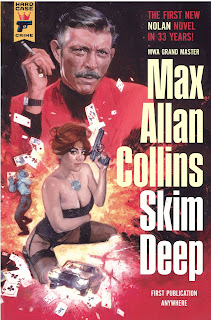 The best is left for last. Or so the old adage goes. From our perspective, never having read any of the previous books in this series, we are grateful to have read this supposed last entry. After reading “Skim Deep,” we truly regretted not having found and read the earlier Nolan titles. Nolan is a professional thief with a checkered past. As this tale unfolds, he’s now in his mid-fifties, living with a beautiful young lady half his age and, together, they operate a fancy dinner restaurant. Nolan has retired from his criminal ways, and with the apparent blessings of the Chicago Mob, is very content to be on the straight and narrow path. There’s little else he wants.

Which is what prompts him to propose to Sherry, his young lover and companion. He’s ready for a commitment even to the point of discussing the possibility of their having children together. Though somewhat shocked by his unexpected offer, Sherry waste no time in accepting and in no time flat, they are flying off to Los Vegas where they will get hitched at one of those kitschy chapels.

All the while this main plot is moving along, we are given a second and nastier narrative. During past capers, Nolan had killed two redneck brothers who had set out to double-cross him. What he was unaware of is that their mother, a widowed old witch living on an isolated country farm in Missouri, has a third son. Having discovered Nolan was responsible for the death of her older boys, Ma Comfort, manipulates Daniel, the youngest, to hunt down Nolan and get revenge for her.

The two plots fail to collide as Daniel shows up at Nolan and Sherry’s home only a few days after their departure to Los Vegas. Frustrated at first, the would-be killer then decides to stay in the area and use the time to carefully plan out his deadly welcome home for the newlyweds.

Collin flawlessly weaves both plots back and forth as if he’s braiding a storyline, making it only more suspenseful with every new twist and turn. Once in Vegas, Nolan connects with a few old friends unaware that his presence has made it possible for one of them put into motion a convoluted casino theft.

As always, Collins writing is cinematic and each scene is so wonderfully visualized, this reviewer couldn’t help but wish some Hollywood producer would option this for the big screen. Unlike a few of his other series wherein Collins purposely doesn’t delineate the actual look of his protagonist, with Nolan, we are told up front that he’s the spitting image of western movie actor Lee Van Cleef. You would think that in all of movieland, there would be several decent Van Cleef look-alikes. “Skim Deep,” is a delicious read with terrific characters and as always, so damn readable. Collins makes you feel as if you were sitting at a bar with him, as he spins his yarn. It’s that personal.

Finally, a tip of the pulp fedora to the folks at Hard Case Crime, for releasing three other early Nolan books in brand new editions, all sporting really beautiful covers by artist by Mark Eastbrook. Each of these is a gem.

All of the Nolan books are good. I liked #3 and 4 the best, and really thought the series ended with Spree. I'm curious to see how this series works in a new century.