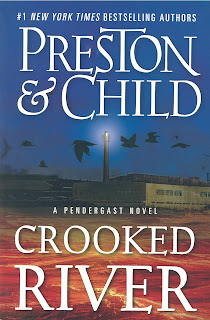 When authors make the bestseller lists as Preston and Child have done with their Special Agent Pendergast series, publishers love nothing better than filling two or three pages in each new book with review blurbs shouting the praises of the previous titles. Which is all well and good; however we’ve noticed a trend in several reviewers to compare this unique character with Arthur Conan Doyle’s legendary detective Sherlock Holmes. Of course there are similarities in that both men are brilliant and have uncanny skills in solving bizarre crimes. But we’d like to suggest the one classic fiction hero Agent Pendergast more clearly resembles is Walter Gibson’s pulp icon the Shadow.

The answer is in the formula of each series. Whereas Holmes took on his cases with a singular assistant, Dr. Watson, the Shadow was noted for orchestrating his investigation via a group of highly skilled operatives. From Margo Lane, to Harry Vincent, Shrevy and many, many others, the mysterious crime fighter oftentimes didn’t appear in the adventure until the climax; his agents having assembled the clues he required. Writers Preston and Child have, over a series of 18 Pendergast mysteries, done the same thing as this latest case so clearly demonstrates.

When over a hundred severed feet still encased in canvas shoes wash up on the beach of Captiva, Florida, a small, exclusive tourist town, FBI Special Agent Pendergast is assigned the baffling case. Whereas when operating from his homebase in New York City, the silver-haired Pendergast is often is assisted by Lt. Vincent D’Agosta, archeologist Nora Kelly or butler/chauffeur Proctor and others; all of them capable of standing toe to toe with any of the Shadow’s group.

Now, away from home, Pendergast employs another group of skilled individuals to assist him starting with his own ward, the mysterious Constance Greene, a young lady a whole lot older than normal science dictates. FBI Agent Coldmoon, half-Italian, half Lakota Sioux with a pension for burnt coffee and Sheriff P.B. Perelman, an intellectual turned peace officer. Over the course of their investigation, Pendergast’s team will cover the globe from manufacturing provinces in China to a small jungle village in Guatemala collecting the various strings that ultimately lead back to a twisted cabal that will stop at nothing to achieve their horrendous goals.

We’ve been a fan of the Pendergast series from the first entry and continue to relish each new book. “Crooked River” is one of the best thus far. If you love modern pulp fiction done with flair and panache, this one will keep you up all night.