THE GIRL WITH THE DEEP BLUE EYES 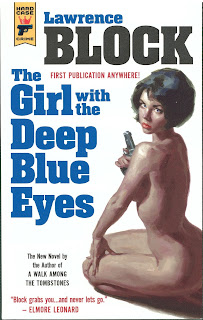 With this novel, Block tips his noir fedora to the late novelist James M. Cain who wrote both “The Postman Always Rings Twice” and “Double Indemnity.” Both are considered crime fiction classics and both revolve around a beautiful femme fatale who seduces her lover into helping her murder her husband.

Doak Miller is a divorced, retired New York cop living in Florida and doing a little P.I. work. When the local sheriff asks his help in setting up a sting, it is to catch a beautiful young woman looking to hire someone to kill her older, rich husband. But once Miller sees a photo of Lisa Yarrow Otterbein, he falls for her like the proverbial ton of bricks. Which poses the immediate problem of extracting from the trap she is in and then convincing the sheriff she actually changed her mind about wanting her spouse six feet under.

Once Doak confesses to Lisa he is on her side and the two become lovers, it is only inevitable they will again confront the same problem; how to get rid of the old man so they can both live high off his riches. Doak, per his experiences as a police officer, knows the odds against them being able to successfully get away with it. The sheriff already has Lisa on his radar and should hubby suddenly drop dead, regardless of how it happens, he would logically focus on Lisa as his primary suspect.

Block is a mean writer and not for the squeamish. His characters are raw unlikeable people and yet still mesmerizing in their own tragic ways. Doak’s dilemma boils down to his being unable to keep “it” in his pants. A subject that comes up all too often and one he never shies away from, even with Lisa; the flesh and blood embodiment of all his past sexual fantasies. Can this be true love?

One can’t help but relish the scenes in which Doak is glued to his TV set watching noir classis on the Turner channel, to include both “The Postman Always Rings Twice” and “Double Indemnity.” He can’t help but reflect that both are versions of his own story and wonders if their calamitous climaxes are fated for him and Lisa as well. Whereas they are only the products of a fevered writer’s imagination, Doak and Lisa are all too real. Once started, you will have a hard time putting this one down.