MURDER in the RUE DUMAS 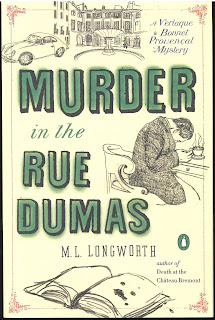 We confess to not reading all that many new books from other countries and perhaps should do so more often. “Murder in the Rue Dumas” comes to us from France by way of M.L. Longworth. She actually resides in Aix, the setting of this story and so generously paints a warm and beautiful picture of the area. Enough to have us wondering how delightful a town it would be to visit. Just not when people are being murdered there.

The head of philosophy department at the nearby college is planning to retire and several of his colleagues are hoping to be his replacement. The position not only comes with prestige and a raise, but also included is a fabulous apartment suite on the campus itself. Some actually believe the apartment if more valuable than the title itself and there is the fact that once awarded, it is a lifetime position. Things go awry when at a party in his apartment, Prof. Moutes tells his friends he has changed his mind and is not going to retire. The next morning he is found dead in his office, his head smashed in.

Enter Judge AntoineVerlaque and Inspector Bruno Paulik to systematically interview the usual suspects from among the faculty and student body. Longworth never rushes the plot along and some readers may be distracted by several of her musings on travel, cooking and love, but we found each delightful. Each of these digressions enhanced our overall enjoyment of the story. Of course the mystery is solved in the end, both by intuition and solid clues but honestly, with “Murder in the Rue Dumas,” it is the journey to it we appreciated most.

Maybe its time to see if our passport is still valid.