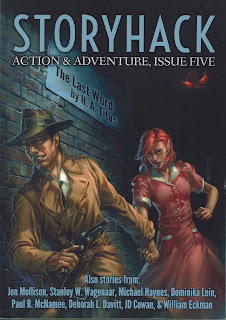 What a great review! I think this series has a great future and says a lot about pulp fiction in general; the readers want it! I would be honored if Bryce selected another of my Gunnolf tales for a future issue. Regardless, I’ll continue to chronicle the adventures of my wandering Northern swordsman for the foreseeable future. It’s great fun to read and write pulp adventure.
Regards,
Stan Wagenaar

I'm glad you enjoyed my story. This is the first work I've had published, and I'm proud to be in StoryHack with several authors I admire. I have some additional ideas I'd like to get down on paper once I get my professional life settled down.