MYSTERY OF THE AMERICAN YETI 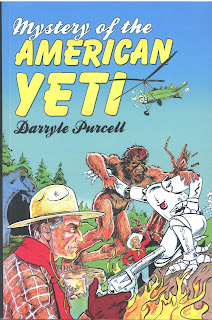 Reading a new Darryle Purcell book is like having your favorite sweet dessert. In this, his latest Hollywood Cowboy Detectives tale, he pulls out all the stops and offers up another fast paced, action packed adventure that is pure pulp.

In 1929 a newsreel crew disappeared in the Cascade Mountains of northern California while searching for the legendary creature known as Sasquatch. Years later, one of their film cameras is found in a charity auction held in an isolated mountain town. The head of Republic Pictures assigns top press writer, Curly Woods and studio chauffeur Nick Danby to go and investigate. Curly immediately contacts retired silent screen actor William S. Hart known to have a cabin in the area. Then he, Nick and western star Hoot Gibson, drive to up to rendezvous with Hart, who will guide them on this particular hunt.

Upon arriving in the Cascades they are ambushed by several members of the American communist party which only adds to the puzzle. What are Reds doing in the area and what is their connection to the missing film crew? This is followed by an encounter with a smelly, hairy beast and then an attack by a mechanical robot of unbelievable power.

From monsters, to spies and eventually a hidden underground city, our heroes never get a moment of rest as their quest leads them to an amazing discovery that underscores the dangers facing the world. Once again, Purcell invites his readers along displaying a genuine love of his characters, both real and fictional, and his understanding of the times. “Mystery of the American Yeti,” is a rootin-tootin’ gem.

I read this one. Over the top in a good way. I really like Purcell's silver screen cowboys series.