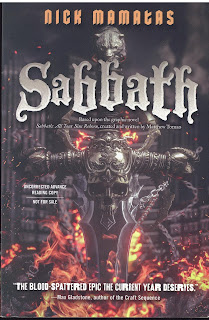 Hexen Sabbath is an 11th Century British knight who enjoys his life of battle and pillaging. He considers himself a Christian warrior and meets his death in combat when he refuses to slay an innocent boy. Centuries later he awakens in modern New York brought back from the dead by an Angel to complete a mission for God. The seven deadly sins have been personified in human form and are planning to destroy the world in a nuclear holocaust. It is Sabbath’s mission to find them and slay them all by decapitation thereby saving mankind.

Before he can begin his gruesome work, Sabbath is befriended by a young woman of Russian descent named Jennifer. Realizing he needs a guide in this new age, he reveals his identity to her and his mission. To his surprise, she reluctantly becomes his ally. By doing so she instantly becomes a target of Sabbath’s most cunning opponents, Pride. In our world, Pride is a powerful politician with aspirations to become the President.

“Sabbath” is dark, humorous romp through today’s sensibilities as it satirically depicts each of the Seven Deadly Sins in all too recognizable personas the readers will be familiar with. There is also lots of blood and gore along the way. It is a daring romp with no quarter given as philosophy meets spirituality head on. This books rocks.