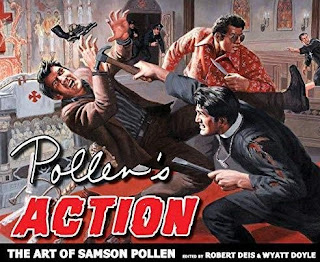 
Through a series of beautifully designed books, Deis and Doyle have collected both the stories and the art of the MAM era. Last year they released their first volume dedicated to Samson Pollen; “Pollen’s Women,” and focused on the artist’s work in capturing the female form in all kinds of dire straits. Now we have this sequel book wherein the spotlight is on verve and energy Pollen gave his action drawings. Each is a master’s study in how to capture motion full tilt. Here is tense drama, nail biting suspence and over-the-top violence captured in a single breathless image for all time. The book is a veritable treasure to any young art student or fan of the pulps. We cannot recommend loudly enough and are damn happy to have it added to our own library.
Posted by Ron Fortier at 10:42 AM