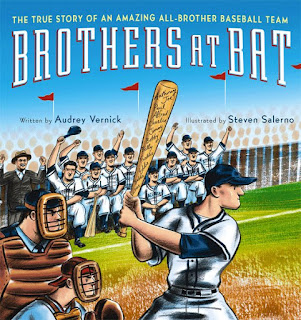 Every now and then we’ll stretch the “fiction” umbrella of this column to include a true story. And we also love baseball and children’s books. So you can then imagine our delight in finding this particular title while surfing the internet one night.

During the days of the Great Depression, the Acerra family of New Jersey had 16 children, 12 boys and 4 girls. The boys, including their father, all loved baseball and played it all the time. Eventually they formed their own team and entered various local and county leagues. Imagine having enough boys to not only field a 9 man roster, but still have another 4 players on the bench. The Acerras were good and soon their reputation spread throughout the North East region.

When World War II came along, six of the brothers enlistd and went off to fight for their country. By God’s graces, and no doubt a mother’s constant prayers, all six came home. With peace time they soon returned to the sport they all loved. In the history of baseball there have only been 29 all brother teams.  The Acerras hold the record for having played the longest.

Writer Audrey Vernick does a superb job in not only capturing the historical facts of this amazing story, but she also imbues it with heart. While artist Steven Salerno is wonderful in his brash, cartoon styling that perfectly captures an era so vividly. If you like baseball, or simply a great human story, “Brothers at Bat” deserves your enthusiastic support.
Posted by Ron Fortier at 9:04 AM

Thanks so much for this lovely review!

Hi Audrey, I'm so glad you found this. Both my wife and I love this book.