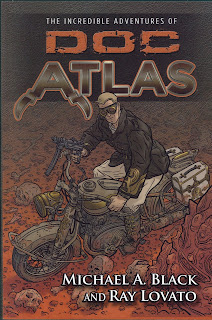 Doc Atlas is a terrific New Pulp hero and if you remain unfamiliar with his adventures, now is the time to jump on board. Airship 27 Productions recently announced they will soon be publishing the brand new adventures of the Golden Avenger courtesy of Misters Black & Lovato. Something truly special to look forward to.
Posted by Ron Fortier at 2:39 PM

The Doc Atlas adventures by Mike and Ray are topnotch. I'm glad these stories are still available for readers. They shouldn't be missed. Great stuff!

Thanks for stopping by, Tom. And sit tight, Airship 27 has a lot more Doc Atlas on the way.