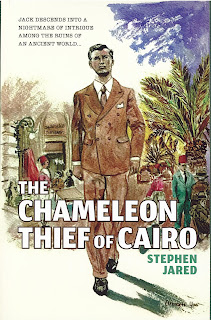 As ever, Stephen Jared spins an old fashion, colorful tale of intrigue, mystery and the noble sacrifice of loyalty. In a world where no one can be trusted, Jack and Clancy’s unyielding friendship may be the one real advantage they have of completing their mission and surving it. This is a well plotted thriller that moves at a comfortable pace, eschewing cheap stereotypical action for skillful characterizations. In the end, it is a classic tale of romantic adventure that does not disappoint. Highly recommended.
Posted by Ron Fortier at 12:02 PM