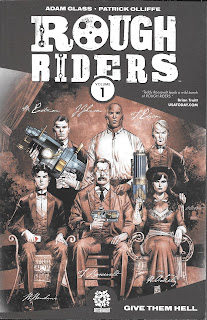 In the end it’s been a long, long time since we’ve truly relished a comic adventure this much.  “Rough Riders” is brilliant, genius, fun…and every other positive adjective one can whip up. Please, if you truly love comics, pick it up a copy now. You can thank us later.
Posted by Ron Fortier at 1:17 PM