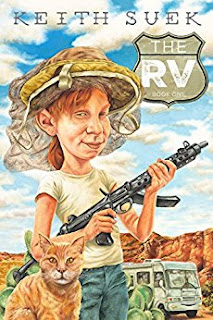 Being a book reviewer can at times be a maddening challenge with absolutely no rhyme or reason. Keith Suek, who hails from Wyoming, sent us his book, RV, after meeting us at a comic convention in Cheyenne. In the accompanying letter, he mentioned not getting any response via Amazon and hoping a review from us would help shake things up. Well, we have no idea if that will happen, but then again we do know the damn book did in fact shake us up…radically.

It is almost impossible to accurately review because no matter how we approach it, there is the reality we’ll be leaving behind negative conations in what we are about to say. So, dear readers of good, solid action fiction take what we say with a huge grain of salt…and be wary. Keith Suek is not a bad writer at all. In fact, underneath the editorial mess this book is, we truly believe there exist a very talented storyteller. So, before going much further in this review, let’s talk story.

The American/Mexican border. An oilman named Ian D’eath teams up with a Border Patrolman named Hector Munoz to take on a deadly drug cartel called the Arana. These South of the Border thugs are merciless and have no qualms in killing whoever stands in the way of their making money; be it flooding the country with illegal drugs, kidnapping young teenage American girls and selling them to Arab millionaires or cutting up Mexican natives from the hills to sell their body parts. Again, as we said, these are really bad hombres that Ian and Hector have, through various life choices, found themselves opposing. When they learned of six recently snatched girls, they put together a posse of their own, cross over into Mexico and attempt to rescue them.

The bullets fly fast and furious as Suek obviously knows his firearms and is not the least be squeamish in describing what hot lead of various calibers will do to the human body. There are parts in this book that read like masochistic poetry, the violence is so in your face. On this front, as a pure, unadulterated actioner, RV is like a racing Grayhound that has broken its leash and escape. The pages almost turn themselves.

So what’s the problem? The problem is no page in this entire book ever saw the scrutiny of an editor, pro or amateur. The book is a grammatical nightmare filled with so many typos, and punctuation sins that they mimic the shells spitting from the weapons in the story. It’s as if Suek can’t be bothered with that bread of his sandwich and just wants to get to the slice bologna between it. All well and good for the author, but not so for the hapless reader who opens that cover.

We truly wish we could give this book nothing but high marks, but that wouldn’t be fair to our readers who expect a modicum of polish in a published book. Maybe RV is in itself what is good and what is bad about today’s self-publishing market. On one hand, Suek was able to get his manuscript in print…on the other hand, it got into print as a mess and that is unacceptable.  Final word here.  Kevin Suek, you know how to write…find an editor on-line and pay them to work with you. You have so much potential, don’t let it go to waste.