THE SLEEP DETECTIVES GO TO WASHINGTON 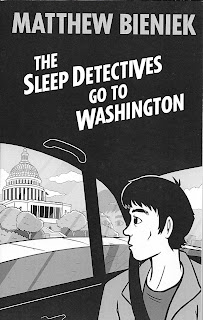 Matthew Bienek has been writing and self-publishing his genre books for the past few years. He’s a regular at the annual Windy City Pulp & Paper Convention and that is where our paths crossed. Several years ago he gave me a copy of “The Sleep Detectives,” the first in a series about a young man named Tony Michalik who has the ability to visit, in his dreams, any event that has occurred in the past. By doing so, Tony was able to help the Acme Detective Agency solved many of the local police’s Cold Cases. It was a fun book and really well written. Bienek has a no-nonsense approach to his writing and he pays attention to details, never ignoring them while being very careful to maintain a specific logic in his narrative.

Since that first book, he’s done a few Sleep Detective novelettes and now he offers us a second full length adventure. The tale starts up a year later with Tony having become a valuable asset to the Acme Detective Agency. Enough so that their unusual success rate at solving crimes has come to the attention of several government agencies, in particular the C.I.A. Through their own means, they discover that Tony is the reason for the company’s successes and approach him with an offer to work for them. To sweeten the deal, they invite Tony, accompanied by his girlfriend Maria and best friend Danny, to Washington D.C. to meet with specialists in the field of paranormal abilities. As Tony has a fear of flying, the trio, along with the agent, opt to travel by train. Hours before their arrival in the nation’s capitol, the operative is murdered in his sleeping car leaving our heroes in a real quandary. They decide to make their way to Fort Meade, where their C.I.A. appointment was set up on their own and hope to discover some answers.

As the plot moves along, Tony and his pals learn that there are Soviet Agents who may be responsible for the agent’s death as they are also trying to recruit Tony. At first he assumes it is for their country but later learns the two foreign spies are working for a private firm made up of former C.I.A. and F.B.I. people who work for rich clients in the shadowy world of international espionage. Eventually Tony encounters representatives of this group and shortly thereafter is involved with another murder.

Bienek never falls into the Hollywood trap of turning his likeable protagonist into some kind of instant superhero. Tony remains very much a sincere young man whose desire is to help other with his uncanny abilities and is very naïve to the machinizations of mercenary intelligence agencies. This is another solid entry in a superbly realized series and we liked it as much as the first book. Here’s hoping a third Sleeping Detective is just around the corner.
Posted by Ron Fortier at 9:36 AM