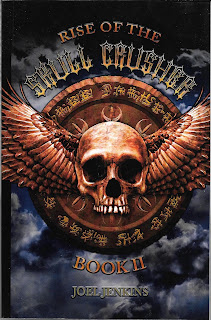 In the Greattrix saga, writer Jenkins weaves an adventure that is eighty percent Edgar Rice Burroughs Martian tales as if they filtered through George R.R. Martin’s “Game of Thrones.” This volume is a delightful mix of over-the-top action and Machiavellian intrigues all perfectly balanced with a deft touch. Jenkins strength is his imagination and ability to create some of the most memorable female characters ever to grace the pages of a fantasy epic; each is unique and equally memorable. We enjoyed the first entry in this series a great deal and are thrilled that the verve and adventure haven’t let up one single bit in this second installment. If you love original fantasy adventure, you’ll look far and wide before finding anything as good as this saga. So says this reviewer.
Posted by Ron Fortier at 4:13 PM