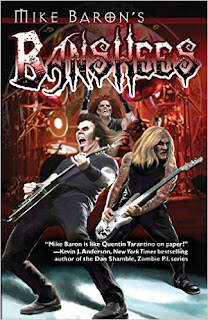 Baron’s book is a rocket blast of suspense that moves at breakneck speed. Along the way it is crammed with hundreds of hilarious cultural bon mots and innuendos that set it leagues above other mundane horror tales.  “Banshees” is a brilliant achievement by a creative force that is just getting warmed up.
Posted by Ron Fortier at 11:45 AM