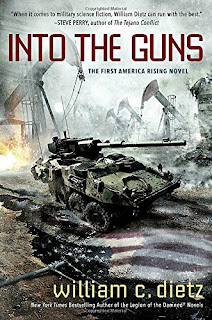 This isn't the first time Dietz has destroyed the world and he's gotten better at it. INTO THE GUNS doesn't waste a second getting going right out of the gate. On May Day 2018, 60 meteors hit the Earth and send the world into chaos. The United States lose Washington and the government is wiped out in one disastrous stroke, sending the country into upheaval where resources are the new currency and power is up for grabs.

We initially experience the catastrophe through the eyes of First Lieutenant Robin "Mac" Macintyre. She's career military as is her sister and father though they don't see eye to eye on most things - to put it mildly.  In the wake of the strikes, her first concern is protecting her unit while trying to hammer out her next move now that the military command structure is either gone or cut off.

Dietz then switches the action from Mac to Samuel T. Sloan, the United States Secretary of Energy. He's in Tampico on an official function when meteor strikes send a tsunami into the coastal city - while an attempt is being made to kidnap him.

With the players in place, things heat up as Mac is confronted by roving bands or small and well organized raiders, hoarders and those making power grabs while Sloan finds himself faced with enough troubles to give James Bond the jitters. Dietz's action scenes are, as usual, second to none. It's not just one gun blazing scene after another. Strategies are employed and they don't always work. The battles are realistic, heroic, tragic, chaotic and impactful in driving the story forward.

The characterization is spot on and you can't help but root for the novel's heroes as they gradually are united against a common enemy. The world becomes a very, very dangerous place overnight and everyone is in it up to their necks. Actions have consequences here and our protagonists are not necessarily given a free pass. As INTO THE GUNS is the first of a trilogy, Dietz does a great job of setting things up for the next installments but doesn't skimp on the action and plot movement.

All this makes for an engaging reading. We're not talking about a series of cool action scenes strung together. No, INTO THE GUNS has a definite goal and it gets there in spades.  The stakes continue to rise as the meteor dust settles. Battles big and small are waged but they are only the opening shots of a war to come. By the time you get to the last page, you're out of breath. But things are really only getting started. This reader is looking forward to the next book in the series.

INTO THE GUNS delivers! You don't want to miss this one.
Posted by Ron Fortier at 6:38 AM

I must say that Ron's review of Into The Guns was extremely professional... This guy can write.

Read the entire legion of the dammed series and was anxious to read his other offerings. This book does not dissapoint