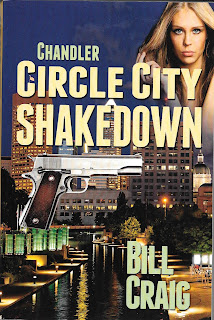 Bill Craig can knock out a half dozen crime thrillers faster than most established writers can do one. The amazement is, they are all damn good books. With “Circle City Shakedown,” first released in 2014, he starts a brand new series featuring a former U.S. Deputy Marshal named Phillip Chandler who has come to Indianapolis to start his new career as a private investigator.

Before going much further here, let’s state that one of this book’s many pluses was setting it take place anywhere other than New York, Los Angeles or Miami.  Not that we have any issues with books using those locales, only that they’ve been terribly over-used in the past and it is truly refreshing to see a private eye working somewhere else for a change. That Craig knows Indy all too well, is evident from the first page and thus is able to bring the reader into this tale effortlessly.

Chandler’s first case as a new private dick is to locate a missing stripper with the stage name Rita Red. According to her friend, another dancer named Mary Norman, Rita went to a private party on the suggestion of the stage manager and never came home.  Taking the case, Chandler soon begins to suspect Rita has met with foul play at the hands of a sadistic city official with both deep pockets and ties to corrupt financial power brokers.  That corruption even extends into the police department and the more he digs, the more dangerous his job becomes.

“Circle City Shakedown” moves fast like the blast of a .45 lead slug.  Craig never lets his plot languish and keeps Chandler moving through this twisted maze of crime and corruption like a juggernaut on auto-pilot.  We eventually learn that Chandler’s wife and daughter had been brutally murdered by a former gang boss and one of the men responsible for their deaths is connected with the people he is investigating.

The characters here are rich and appealing and Craig orchestrates the entire story so that it builds to a powerful climax that delivers everything a good thriller should have.  By the last page, we were glad to have met this new shamus and his supporting cast and will be anxious to see what other kinds of trouble they get into next time.