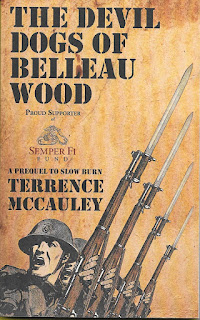 We haven’t read a war book this good since Richard Matheson’s “The Beardless Warriors.”  For a small volume it packs a solid punch proving once again that Terrence McCauley is a rising star in today’s fiction.  Not to be missed.
Posted by Ron Fortier at 10:31 AM