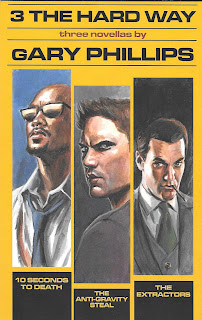 “3 The Hard Way,” is such an awesome volume as it stands.  But to sweeten the pot even more, Phillips has added a brand new Essex Man short to welcome readers to the worlds of his amazing imagination.  In a time when we are seeing more and more wonderful new pulp fiction entering the literary world, Gary Phillips is far out front leading the pack. It would do you well to start reading him now rather than play catch up later.
Posted by Ron Fortier at 9:03 AM