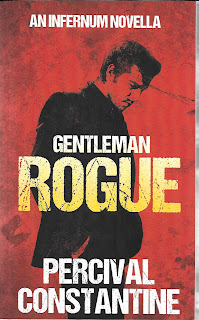 “Gentleman Rogue” is the third in a series about a shadowy spy organization and the mysterious man who operates, Dante.  The first was a mixed bag called “Love and Bullets” which evidenced the potential Constantine had as a writer.  With the second, “Outlaw Blues,” that promise was realized and now with this latest entry, he lets loose with a wonderful, sophisticated heist caper that hits all the classic beats readers expect from this genre.

The fun here is his protagonist Dalton Moore, a former British Spy turned thief who has left his past behind and adopted a humanitarian code of ethics wherein he does not kill; even his worst enemies. Not that easy an oath to maintain when being chased around the globe by some of the deadliest assassins in the world.  A criminal mastermind named Johnny Venom has obtained a drug that turns people into mindless savages and is about to auction it off to the international terrorist organizations.  Dante wants Dalton to steal the drug, called Fury, and deliver it to him. He manipulates Dalton by offering to tell him where his missing father is being imprisoned and upon the delivery of Fury, Dante says he will free the old man. Dalton reluctantly accepts the deal.

But as ever there are always wrinkles in these spy missions.  For Dalton it is being saddled with the sexy but deadly Tauna, one of Dante’s personal lieutenants. Dalton is none to happy to have her shadowing his every move.  Of course the bad guys are no slouches either when it comes to gathering intel and soon Dalton and Tauna learn that Venom has dispatched the silent assassin Vincente to find and dispose of them.
All the while, it becomes clear to Dalton that someone, either in his own camp, or Dante’s group, has sold them out; they have a traitor in their midst.

Part heist, part chase and totally one hundred percent action packed, “Gentlemen Rogue” is gem of a read.  Dalton Moore and Tauna are likeable characters and Constantine would be wise to bring them back soon.  As for the Infernum series as a whole, each new chapter is better than the last.  Thus you have to believe this reviewer is now most anxious for volume four.