THE MEN WHO MADE THE YANKEES 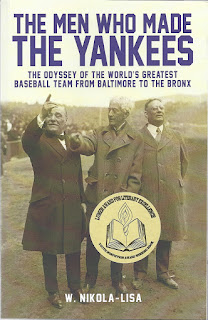 THE MEN WHO MADE THE YANKEES
By W. Nikola-Lisa
Gyroscopebooks.Com
113 pages

This is not the first time we’ve reviewed a non-fiction book in this column.  That is not the relevant note here but rather what the theme of this new review is and our own personal passion.  Let it be known loud and clear, this reviewer is a bonafide Red Sox fan.  Always have been and will die as such.  So what on earth would possess us to read, let alone review a book about the history of the Red Sox’s greatest rivals, the New York Yankees?  Our answer isn’t complicated at all.  We not only love baseball, in all its incarnations, but we are history buffs as well.  Thus when this book was offered to us, there was absolutely no hesitation in requesting a copy.

“The Men Who Made the Yankees,” is a wonderful story filled with little known anecdotes about the real history of America’s favorite pastime.  Chapter after chapter, author Nikola-Lisa sets forth the twisted, often antagonistic, rise of professional baseball in America and completely it was intertwined with the post-Civil War growth of our great nation.  Baseball’s evolution was tied to rising prosperity of its major eastern cites as the industrial revolution came into full force.  As Americans left the 19th Century agricultural mores of being tied to 18 hour days and through the advent of fantastical new machines found themselves with the treasure of leisure time, sports and theater entertainments mushroomed across the land.

Every “big city” wanted its own baseball team.  Savvy entrepreneurs from all walks of life began to see the money-making potential of professional baseball and leagues began to sprout up like weeds; so many that it was difficult for the average fan to keep up with what players were playing for what teams…in what leagues during the years between 1890 and 1910.  Those twenty years saw the emergence of dozens of teams, ornery managers, colorful club owners and truly gifted ballplayers.

We loved how deftly the author wove his way through this convoluted period while at the same time etching these larger-than-life personalities that would give their blood, sweat and tears to make baseball successful.  He tells the beginnings of traditions, gives us simple factoids such as how the first balls were made from wood and cloth and how their ultimate transformation into the hard spheres we know today would change the entire game fundamentally.  It is these side-line essays that enrich the entire book and make it something truly special.

The long time baseball fan will recognize many of the names in this story whereas the rookie with a pension for understanding history will be equally rewarded by picking up this little book.  As a kid growing up in New England, we fondly remember an old radio sportscaster who would end his show with this phrase, “Next to religion, nothing contributes more to the wellbeing of America than sports.”  “The Men Who Made The Yankees,” has that very same philosophy and to that we simply say, “Amen.”