SEVEN FOR A SECRET 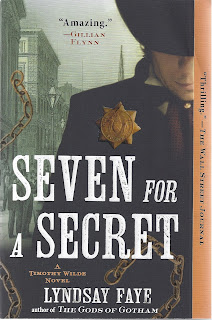 In 2012 writer Lyndsay Faye set mystery fiction world on its collective rear with the release of her historical mystery, “The Gods of Gotham.” That it went on to receive a Best Novel nominations from the Mystery Writers of America was no surprise to any of the millions of fans who had to read it. In that book we were introduced to two orphaned brothers of Irish immigrant parents, Valentine and Timothy Wilde, both living in New York City in 1845.

The plot of that first story was centered about the creation of New York’s first ever Police Department and related how the brothers, for their own personal reasons, chose to put on the copper star and join this new law keeping body. Shortly thereafter Timothy uncovered the works of a child serial killer and was successful at tracking him down and ending his reign of terror. But his triumph was not without personal sacrifices from the abandonment of the woman he loved and the vicious animus of another who vowed to cause him unending suffering.

“Seven For a Secret,” picks up with Wilde brothers almost a year later. Though missing Ms. Mercy Underwood badly, Timothy has been able to focus his energies on his new career as a detective.  According to Commissioner Matsell, Timothy has a “gift” for solving puzzles which makes him ideal for police work. Soon enough, our hero finds himself caught up in another tragic murder; one that revolves around the heinous practice of slave catching that occurred all too often during this time period. With the advent of the Underground Railroad, more and more slaves fled to northern cities in hopes of making their way to Canada and freedom. Sadly the laws regarding such abductions were vague at best and legal magistrates found themselves unable to determine whether the captured black men and women were actually runaway slaves or northern born free men and women.

When Timothy learns that two black women and a child have been abducted from their home by southern bounty-hunters, he enlists Valentine’s aid in rescuing them. Two days later one of the women is found strangled in Valentine’s apartment and her sister and son once again missing. Ms. Faye weaves a powerful story set against one of history’s ugliest eras, embroiling her characters in the hellish boiling pot of mixed cultures that was New York. As in her previous novel, the city is always a major element in the tale and her ability to capture its people, their language, hopes, dreams and agonizing despair is as skillful as any sculptor shaping a stone figure.

Her command of words is the essence of poetry and we found ourselves relishing each new metaphor that would fly from her imagination. She is a gifted writer with an uncanny sense of time and place…and above all the human condition. If you enjoy solid history mixed with heartfelt drame, you won’t do any better than “Seven For a Secret.” It is a great book!
Posted by Ron Fortier at 4:14 PM