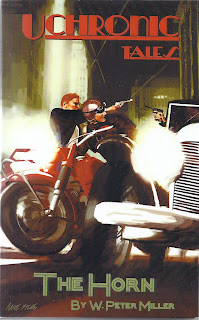 The Horn by Peter Miller is his second little novella published in digest form and featuring American Insurance Investigator Clark Tyler.  Using small sized text in only fifty-pages, “The Horn” tells a very speedy pulp actioner that is easily read in one sitting.

It is 1932 in Los Angeles and someone has stolen a priceless ancient artifact from a museum. Tyler is brought in to investigate.  It turns out the object taken might well be Gabriel’s Horn and should it be played could produced unimaginable devastation to the area in which it is sounded.  As soon as Tyler pieces this unbelievable story together, he then learns the most likely culprits are Nazi spies who intend to “blow” the horn at the Los Angeles Olympic Games in the hopes of killing thousands and discrediting America at the same time.

This short thriller moves rapidly and is a real page turner.  Tyler, whom we last saw in the first Uchronic digest, “The Zeppelin,” is a likeable hero and I hope Miller has lots more of these mini pulps coming our way.
Posted by Ron Fortier at 12:08 PM