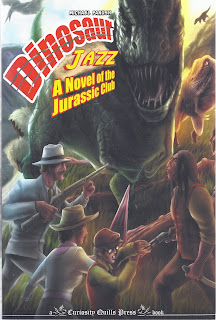 Saying I liked this book would be one of the grossest understatements ever to come from my pen.  “Dinosaur Jazz,” by Michael Panush has leaped into the top three of my favorite pulp novels thus far this year.  Yes, dear readers, it is that good, as I’m about to explain.

The back story goes like this.  At the turn of the 20th Century, a massive island is discovered in the Pacific Ocean teaming with real dinosaurs.  Not only dinos, but wooly mammoths and saber-tooth tigers share this savage land together; creatures from different epochs. There is also a race of barbaric humans the early explorers of the island call Ape Men.  The island also contains half a dozen strange ruins completely alien to the world’s leading archeologist.  Called Archeron Island, it is the setting for Panush’s tale of high adventure.

The narrative kicks off several years after the end of World War One.  By this time colonists from around the world, especially Great Britain, have established cities along the island coast line and under the auspices of the League of Nation, an international administration sees to the day-to-day governing of this amazing land.  Still there are gangsters and smugglers who have made a lucrative business from all the natural riches Archeron offers. The protagonist is Sir Edwin Crowe, a dino guide/hunter and the son of the island’s discoverer, Lord Horatio Crowe.  Sir Edwin and his step-brother, an Ape Man named James and raised by Lord Crowe after his parents died, are content with their lives.  Edwin had fought in the Great War and his haunted by the memories of those days.

Their idyllic existence is unexpectedly turned upside down when a ruthless American industrialist, Selwyn Slade, arrives on Archeron leading an army of mercenaries and a coterie of lawyers. Slade wishes to buy all the land upon which the mysterious ruins rests and will do anything to possess them.  Then a rampaging army of Russian Cossacks and Mongols led by a sadistic former British General named Ironside appear in the jungles and randomly begin attacking some Ape Men villages while at the same time arming others with modern weapons and urging them to warfare.

Suddenly the land Sir Edwin calls home is about to erupt into battlefield that will leave it bloodied and scarred forever unless he can discover the truth behind Slade’s bizarre scheme and prove his connections to warlord Ironside.  From the swank jazz clubs of Victoria City to the frozen wastelands of the Aspholdel Heights, Sir Edwin, James and their colorful band of allies will battle desperately to uncover the truth and sacrifice all to save the most amazing island in the world.

Rampaging dinosaurs, sexy torch singers, airships, Tommy Guns, cavemen, pirates and a oriental Dragon Lady; “Dinosaur Jazz” has everything a pulp fancier could want and it’s all mixed brilliantly into a tale that is both original and marvelously entertaining.  It is the epitome of what New Pulp Fiction is all about and Michael Panush is a superior writing force to be reckoned with.  Enough of my prattling, if you love pulp fiction, “Dinosaur Jazz” is required readying. Do not miss it.
Posted by Ron Fortier at 4:28 PM

Thanks for the review! I'm delighted you like the book and if you ever want to collaborate on some articles in the future, just let me know!

Thanks for the great review!

Just got my e-copy, looking forward to a few evenings of fun.
Thanks for selling me another book!