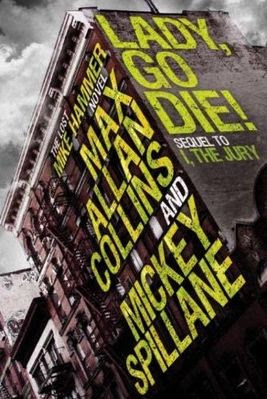 LADY, GO DIE
By Max Allan Collins & Mickey Spillane
Titan Books
241 pages
Available May 2012
After returning home from World War II, veteran Mickey Spillane was prepared to go back to his civilian job of writing comics.  But instead, he opted to take an idea for a new comic series and turn it into a private eye novel called, “I, The Jury.” Released in 1947, it was the first book to feature tough-as-nails Mike Hammer. (His last name pretty much defining everything he was about.)  The book was a phenomenal success and the publisher was eager to get Spillane to do more.  Three years later the first Mike Hammer sequel, “My Gun is Quick” appeared on the bookstore shelves and became as big a seller as the first.  Both Spillane and his creation were on their way to becoming literary icons.
When Spillane passed away several years ago, he left his notes and such to his friend and protégé, Max Allan Collins.  Among these files were bits and pieces of unfinished Mike Hammer mysteries.  Getting the green light from several excited publishers, Collins set about finishing these projects and getting them in print.  Thus far we’ve seen three; “The Goliath Bone” (2008), “The Big Bang” (2010) and last year’s “Kiss Her Goodbye.” Now comes the fourth and perhaps the most anxiously awaited of the entire lot.  You see, according to Collins’ prologue notes, “Lady, Go Die” is actually the original sequel Spillane had intended to follow “I, The Jury.”  Why he never finished it and instead completed and offered up “My Gun is Quick” is a puzzle no one will ever be able to fully solve.  Still, it adds a generous slice of real mystery to this story that was envisioned by one of the greatest writers of our times nearly seventy years ago.
Taking up where the first Hammer book left off, “Lady, Go Die” finds the irascible P.I. and his gorgeous brunette secretary, Velda, traveling to a little beach resort town in Long Island for some R & R.  Velda and Hammer’s cop pal, Det. Pat Chambers, think the emotional battering he suffered in his first case has left Hammer in need of some quiet time.  Alas, as they discover all too speedily, Hammer’s personal shadow is called Trouble.  No sooner does the couple arrive in Sidon, nearly deserted in its off-season, then they witness the brutal beating of a slow-witted drifter by three policemen, one known to Hammer as a dirty cop from the City.
Hammer steps in, pounds a few heads and rescues the helpless young man.  Within hours, he and Velda learn that the small community is in a tizzy, as its most popular citizen, a famous ex-dancer turned media celebrity has vanished without a trace.  Days later, her nude body is found draped over the stone statue of a horse in the park on the public beach.
Hammer smells the familiar odor of corruption and begins to investigate on his own. He soon learns the dead woman’s mansion was in actuality a secret gambling casino being fronted by a mob personality whose identity is carefully hidden.  As if that weren’t enough to keep Hammer and Velda busy, dodging lead and wrestling with gangster muscle, their inquiries also unearth other, supposedly unrelated murders; all of young women in neighboring towns and counties.  Now the savvy Hammer has to follow two different trails and decide if they connect or not.  Suddenly he’s confronting dangerous mob gunsels at the same time hunting a twisted serial killer who may be targeting his next victim.
“Lady, Go Die” is another terrific Mike Hammer caper that moves non-stop like a flying cheetah across the reader’s field of imagination and comes to a pouncing kill in a truly classic Spillane finale.  A big tip of the pulp fedora to this one, gents.
Posted by Ron Fortier at 10:05 AM

Thanks so much for this great review.

I do hope people understand that I am working from substantial manuscripts here. LADY, GO DIE! was an 80 page manuscript from 1945that I combined with a shorter Spillane/Hammer manuscript dealing with similar subject matter written in the sixties. The end result is probably a 50/50 collaboration, but remember: Mickey created both Mike Hammer and the idea for the story. So the lion's share of credit and praise should go to him.