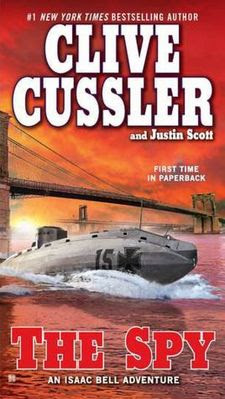 THE SPY
By Justin Scott & Clive Cussler
Berkley Novel
528 pages
The third adventure in this series created by Clive Cussler and taken over by Justin Scott is another fine entry relating the cases of Isaac Bell, the top agent of the Van Dorn Detective Agency.  When foreign spies from Japan and Germany launch acts of murder and sabotage aimed at crippling the Navy’s battleship program, the noted detective agency is brought into the case.  This happens at the request of a young lady whose father, a gun battery expert, is found to have committed suicide after taking a bribe. Incensed by this slur of her father’s good name, the woman begs the agency to dig deep and prove what she suspects; that her father was actually murdered and the charges against him false.
The start is slow going for Isaac Bell, but bit by bit, oddities in the case begin to surface while at the same time, supposedly unrelated accidents continue to plague the Navy’s shipyards on both the East and West coast until the pattern of these events is just too coincidental to be ignored.  Once on the case, Bell becomes the bulldog man-hunter we’ve come to enjoy in his previous outings and he soon comes to realize he is chasing a deviously cunningly spy with no loyalties to any single government.  This shadowy manipulator is in fact a mercenary attempted to create a world conflict that will line his own pockets with riches.  War is good business.
From the docks of the Brooklyn Navy Yard to the ports of California, Bell and his courageous team of agents find themselves racing against the clock to prevent the Spy Master’s ultimate coup, a terrorist attack that will set the country’s defense plans back by decades and leave American vulnerable to its enemies abroad. Once again Scott sets his suspense thriller against a backdrop of historical accuracy, detailing the emergence of a young republic about to claim its place on the world’s stage.  But will this Manifest Destiny end long before it is born?
Filled with colorful characters and a beautiful glimpse of another, more innocent time, THE SPY is a worthy addition to this already much acclaimed series.  Issac Bell is clearly the Nick Carter & James Bond of his times.
Posted by Ron Fortier at 11:29 AM