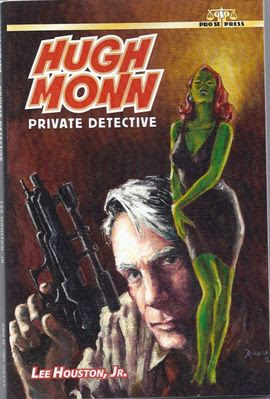 HUGH MONN –Private Detective
By Lee Houston, Jr.
Pro Se Press
176 pages
Genre blending has always been a staple of pulp fiction and there have been many sci-fi based private eye creations over the years.  Writer Lee Houston Jr. isn’t breaking any new ground with this collection. What is his doing is adding to it with a truly sympathetic character in Hugh Monn, a human residing on the planet of Frontera.  For background, we are told that there was an intergalactic war between isolationist who opposed species interaction and the allied worlds who favored it both for moral and economic reasons.  The isolationist lost although remnants survive in bands of outlawed terrorist.  Monn is a battle weary veteran of the campaign having fought with the allies.  Now he’s settled down in his one man private investigations business and the eight cases in this volume have him mixing with various humanoid species also inhabiting the city island of Galveston 2. Each is well done and adds in creating a fascinating supporting cast.
“Dineena’s Dilemna,” in which a disinherited son attempts to frame his cousin for the murder of his own mother.  Alas, private detective Hugh Moon is on the case and spots enough clues to free his client and bring the murderous heir to justice.
In “Shortages” Monn is hired by a docking outfit to solve the theft of merchandise from a highly secured storage facility. It looks like an inside job and evidence implicates one of the alien employees unless Monn can figure out how the thieves are working their operations.
In “Law and Order,” Monn is retained by a Felinoid lawyer named Mau to help clear her client from an armed robbery charge.  The problem is the store’s video tapes clearly show the defendant committing the crime. Moon has to prove that even the eyes can be deceived by digital chicanery.
With “The Siege,” Houston gives us his version of the move “Die Hard,” with Monn going up against group of ant-like terrorist secretly taking over a major business tower at the heart of the island where he resides. Super rifle in hand, the gutsy private eye takes on this squad of trained commandos single handed.
“Where Can I Get A Witness?”  Monn is hired to subpoena an elusive witness in a motor vehicle accident case.  In the process he stumbles over the case of popular female singer who mysteriously vanished decades earlier. What’s the connection being that disappearance and the old man becomes the puzzle he must solve before someone dies.
Then a paternity issue results in a kidnapping and ends with Monn trapping an embezzler who became too greedy, all in the story, “For The Benefit Of Master Tyke.”  This one gives us more of the detective’s character and sensitivity as he tries to keep a family from falling apart.  While “At What Price Gloria?” Monn helps an old acquaintance from an earlier case outwit foreign blackmailers and foil an assassination plot.
Finally the book ends with our hero attempting to have spend, “A Day At The Beach,” only to end up solving a brutal murder with the help of a few other beach goers.
What is particularly refreshing in these tales is that Houston wisely opts not to make his hero a hard-boiled, typically cynical type.  Hugh Monn is a genuinely nice guy who likes people and aliens alike and is sincere in trying to make his world a better place for all to live in.  He’s a good guy I liked meeting and hope to see him again real soon.
Posted by Ron Fortier at 11:48 AM

Reminds me of the "Kamus on Kazar" stories in WEIRD HEROES.

Great Post. I am a Private Investigator Melbourne and it feels great to see such books on private detectives.