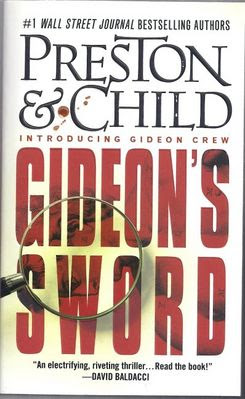 GIDEON’S SWORD
Preston & Child
Vision
380 pages
In 1995, thriller specialist Douglas Preston and Lincoln Child joined forces to write a best selling novel titled, “The Relic.”  In the process, they created one of the most popular action suspense heroes ever to appear on the printed page; FBI Special Agent Pendergast.  Although the book was a big success and later adapted to film, it was the creation of Pendergast that would be remembered. It has always been my personal belief that the character’s instant popularity surprised the two and they wasted no time in bringing him back in further adventures.  Enough so that with each new Pendergast book, his fame among action devotees continued to spread and today he has a huge, loyal following.
When the pair announced, last year, that they had created a brand new series hero and would be releasing his first book in 2011, the news spread like wildfire across the book world. Eager fans soon learned the new character was named Gideon Crew and the authors had clearly set out to make him as different from Agent Pendergast as they could.  We were also informed, via their website, that a major Hollywood studio had optioned the film rights from the galleys alone.  Obviously the marketing machines were moving in high gear.  The hardback arrived earlier this year to resounding critical acclaim and as of a few weeks ago the paperback edition which is what I’ve just finished reading.
Unless one has never read a Preston & Child Pendergast book, it would be impossible for anyone to read “Gideon’s Sword” without constantly comparing the two fictional heroes. What I appreciated immediately was how the writers set about breaking convention and actually giving this premier outing not one but two separate stories.  If the casual reader picks up the title based solely on the back cover blurb, he or she is going to expect to find a typical revenge drama wherein Gideon Crew goes after the people responsible for his father’s death when he was only a child.  This entire opening section of the novel serves brilliantly in defining our protagonist and giving us a complete origin history.  In a few chapters we learn who he is, what he has done with his life and where those choices have taken him.
But when that first plot is resolved effectively in the first quarter of the book, I found myself both surprised and delighted.  Suddenly the book seemed to take a detour down an entirely different road, one that led to the unknown and unexpected.  Crew is recruited by a unique organization in the employ of the government to become an independent spy.
The logic, according to this top secret “engineering” outfit is Crew’s own anonymity in the world of espionage is his greatest asset, one that will give him the advantage over competing foreign agencies.
His first assignment is to retrieve an important formula from a supposedly defecting Chinese scientist. But when that fellow is murdered upon his arrival in New York, Crew finds himself locked in a deadly race with a merciless assassin to retrieve the mysterious data.  Adding to the puzzle is no one knows what the secret really is.  At this point, Preston & Child do what they do best and that is amp up the pacing so that the story and action begin to accelerate exponentially from chapter to chapter until their over-the-top climax arrives, leaving this reviewer with finger blisters from turning the pages so fast.
“Gideon’s Sword” is a top-notch pulp thriller worthy of any fans attention and support.  As to whether Gideon Crew lives up to his predecessor’s well earned status among loyal readers is another matter.  There were many things I liked about Crew, but again this was only a first meeting and I’m going to reserve the thumbs up or down until at least one more book.  There is a rather important plot element regarding the character’s future that I’ve purposely avoided detailing here. It is one you need to discover for yourself.  I won’t spoil it for you.  Read the book and then we’ll talk.
Posted by Ron Fortier at 12:12 PM

Just found a copy in a second hand bookstore that is going out of business after 32 years. Sad to see it close but eager to read this since seeing your review.

Ouch, talk about a double-edged sword. Happy you were able to snag a copy of this cool book, but like you, sorry to see as yet another bookstore go under.

Meant to get back sooner. I enjoyed it. Quick read. Fun story. Thanks for recommending it.