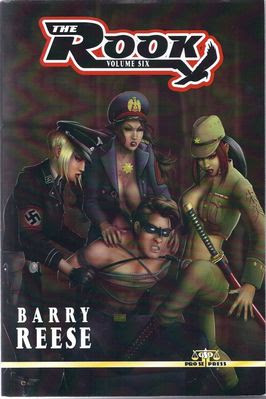 THE ROOK
(Volume 6)
By Barry Reese
Pro-Se Productions
186 pgs
Like many of the Rook’s dedicated fans, I’ve been very anxious to read the latest volume in this marvelous new pulp series; especially since it is the first such debuting from Reese’s new publisher, Pro-Se Productions.  Shifts from one publisher to another can produce some bumps in the road but I was very happy to see  this transition was handled smoothly.  In fact this may be the best Rook collection ever produced.
Allow me to add that the author himself has publicly stated he was not completely satisfiend with his recent outings as his large supporting cast somehow began to take over the center spotlight away from the series’ star, crime-busting avenger, Max Davies.  Davies, for those of you just now becoming acquainted with this series, is a wealthy, Atlanta based business man who leads a secret life as the avenger known world wide as the Rook.  Through the previous five volumes published via Wild Cat Books, we’ve learned of Davies’ history, the murder of his father and subsequent haunting that propelled him into his career as a vigilante.  We’ve met his closest friends, hero allies and a gang of some of the most dastardly villains ever to grace a pulp yarn.
With this latest entry in the Rook saga, we’re given three exceptional stories that move at lightning speed and offer up thrills galore.  The first and longest tale has the Rook going up against a classic German pulp hero from the 1930s, Sun Koh, a Prince from Atlantis who time travels from the past to the 30s in an effort to save his people and the Aryan race.  Sun Koh was an authentic pulp character whose exploits were ended when the Nazis regime, who despised the fanciful literature of the pulps, became threatened by his popularity.  The battle between these two unyielding giants is a real clash of titans, never mind that Reese also throws in three very saucy female Axis agents known as the Furies.  (The cover alone says it all.)
The second and shortest story is a weird outing about a haunted western town and the curse put upon.  The opportunity to see the Rook as a “cowboy” works extremely well and is a real hoot.  Finally the volume closes with the Rook teaming up with as yet another Reese creation, Lazarus Gray and his Sovereign City team known as Assistance Unlimited. They are Reese’s tip of the pulp fedora to the Avenger and his Justice, Inc. In this auspicious meeting, the Rook and Gray hunt a lunatic serial killer who is under the influence of a spectral being calling herself Lady Death.
Barry Reese’s Rook series is one of the major highlights of the New Pulp Fiction movement sweeping the American literary scene.  If you are not reading them yet, it’s time you got caught up on the fun.
Posted by Ron Fortier at 12:36 PM