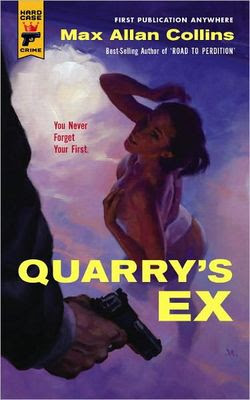 QUARRY’S EX
By Max Allan Collins
Hard Case Crime
211 pages
Available Sept.20, 2011
Max Allan Collins started writing his Quarry books back in 1976 with The Broker.  It was the first time we were introduced to the Vietnam vet turned paid assassin.  In that tale, we learned how Quarry, not his real name of course, came home to find his wife in bed with another man.  He murders the guy by dropping a car on him and then, because of his service record as a war hero, is acquitted by jury.  Shortly thereafter he is recruited by a man known only as the Broker to become a professional killer.
In the books that have appeared since that stellar debut, that opening scenario has often been retold many times to bring the new readers up to speed.  Recently, since becoming affiliated with Hard Case Crime, Collins has begun filling in specific details of Quarry’s life, each more compelling than the last.  In this particular book, we are told what happened to Quarry’s ex-wife after they divorced and parted.  But Quarry’s personal life is, as always case, only the subplot of the story.
Quarry has come to a small Arizona town where a movie studio is shooting an action B movie.  When he discovers that the director of the film is the target of a hit, Quarry approaches the man and offers his own lethal services to both eliminate the threat and discover who put out the contract in the first place.  It is this neat little twist combination of mystery and crime thriller that makes this series so original and fun.  Quarry is no knight-in-shining armor private eye out to save the world.  He’s a killer who makes a good living taking out other killers.
Once the first part of his contract has been efficiently resolved, Quarry is a master of death-dealing, he then becomes a detective chasing down the person who put out the contract on the moviemaker.  As always, there are plenty of juicy suspects from the mob boss who is financing the project to the director’s wife who inherits all if he dies.  The problem is the woman is Quarry’s ex-wife.  The second he lays eyes on her, old familiar feelings he thought long dead begin to resurface, complicating an already precarious situation.
Paying homage to the potboilers of the 40s and 50s, Collins laces his tale with the most outrageous sexual encounters; all done with a sly, sharp wit that is ingratiating.  At the same time he balances that adult humor with explosive violence that is as mesmerizing as it is ugly.  His prose falls into place with the deft touch of a contemporary poet, each line awakening a new possibility in how we see the world.  Reading Quarry is an education in human psychology taught from the barrel of a silenced automatic.
(Postscript – This review was written and posted last year when the book was first published by Dorchester Press.  Shortly thereafter Hard Case Crime parted company with that firm and this new edition is now being released by their new British publisher, Titan Books.)
Posted by Ron Fortier at 10:57 AM