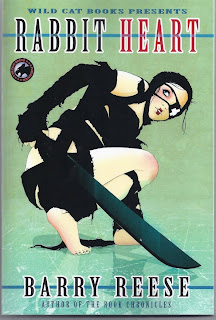 Modern day pulp writer, Barry Reese, eschews the traditional hero avenger fare for something much darker and violent with this thriller that borders on the sensational. One has to imagine he dove into this adult orientated tale with both trepidation and a palpable sense of unfettered freedom. There is plenty of gore, sexual brutality and blatant acts of depravity all meticulously embellished with not a gruesome detail omitted. If you’ve the stomach for it, Rabbit Heart is a savage reading experience but it is not for the timid.

The adventure begins with the death of the protagonist, a young girl named Fiona Chapman. She’s murdered by an outdoor serial killer who fancies himself the next Jason from the Friday the 13th movies. But Fiona doesn’t die, or at least in the same way normal people expire. Instead she somehow biologically evolves into another state of being, one in which she is incredibly strong and powerful. She soon learns that she is one of a handful of mythological spirits who have roamed the world for centuries known as the Furious Hosts.

These semi immortal deities exist only to kill and be killed. They are all players in a bizarre, savage game known as the Hunt. Each is filled with an unquenchable lust compelling them satiate their dark passions by preying on innocent humans while at the same time battling each other until eventually only one will remain. This is of course reminiscent of the Highlander movie series, but with a neat twist. When a Furious Host is killed by another, he or she will be reborn into another body at a later date to resume the contest. Thus killing them permanently is a problem.

Fiona, whose archetype figure she becomes when fighting is that of a sexy bad-girl warrior, is different in that she is actually repulsed by her new supernatural identity. She truly wants to no part of it but doesn’t know how to escape her fate. Then she meets an occult detective from the past who has been tracking the activities of the Furious Host and has come to her with an offer. His name is Ascott Keane and he wants to help Fiona take on the task of finding and destroying all the Hunters, ridding the world of them once and for all.

RABBIT HEART is by far the most accomplished of Reese’s writing to date. Unlike his earlier, fanciful pulp adventures, there is a steadier prose here that is precise and confident. The excess sex and violence is never gratuitous, serves the plot and avoids being pornographic by that masterful writing. I strongly recommend this book to my adult readers looking for something new. Final warning, this is a superior effort but NOT for the squeamish.
Posted by Ron Fortier at 6:56 AM

I'm glad you reviewed this and I appreciate the description of the plot, Ron. I've heard buzz about it and remember when Barry was writing it he was saying how intense and adult it was in places, but I've been wondering exactly what it was all about. Appreciated.

Glad to be of service, Van. As I say several times in the piece, this one isn't for everyone. I do hope people understand that going in. It is for ADULTS ONLY.

This is probably my favorite of Barry's works. While I dig his more mainstream work, the grindhouse fan in me goes apeshit for this book. I couldn't put it down.

Agreed, Perry. There's isn't a dull moment in the book. Grindhouse is a very apt description. Thanks for the comment and I'm anxious to see our latest work soon.