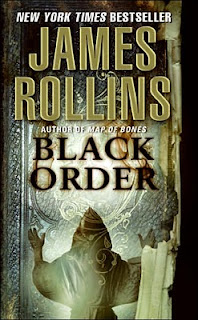 When a book mixes science, religious philosophy and secret societies dating back to the Nazis, you can expect a real spicy pulp stew. Veterinarian turned thriller novelist James Rollins delivers just that and the meal is absolutely scrumptious for the first page bite to the last closing line morsel. Easily one of the best modern pulp adventures I’ve ever had the pleasure of reading.

The adventure opens during the closing days of World War II when allied forces are racing against each other to lay claim to Germany’s scientific innovations developed during the war to include everything from rocket propulsion to medical experimentation.
Amidst this chaos, one German commando unit is attempting to flee the invaders and smuggle out the results of an amazing breakthrough in quantum physics that could alter the shape of mankind forever. Along with these papers and artifacts is a baby unlike any other in the world; the first of a race of true supermen.

Like any good thriller writer, Rollins then jumps ahead in time to the present where members of a special Washington based group known as Sigma Force are involved with what they believe to two distinct missions. The first is an antique book auction being held in Copenhagen and the second is a distress call from a Tibetan monk residing in a monastery located deep in the Himalayas. Commander Gray Pierce follows the European case which centers around a group of killers eager to get their hands on Darwin’s Bible. It supposedly contains secret runes put their by a former German scientist involved with a secret project known only as the Bell. At the same time, Sigma Director Painter Crowe arrives in Tibet, only to find the monks have somehow gone insane and murdered each other. No sooner does he uncover this horror then he is captured and taken to a hidden mountain lair operated by the descendants of the very same German researchers who developed this mysterious Bell.

Rollins’ genius is that he keeps both plot threads moving at breakneck speed, constantly putting Pierce and Crowe in cliffhanger perils and then deftly jumping from one to the other. Thus the action seems to flow non-stop, scene after exciting scene. He also glues these action set pieces with thought provoking debates on what is evolution and where do science and religion meet in its process. Is there a grand design and will quantum physics someday open the blueprint to creation? That these weighty dissertations occur while men are being shot at, mountains exploding and mutated monsters roam the jungles of South Africa is all part of the roller-coaster ride BLACK ORDER delivers.

Recently a friend wrote asking me to passing along names of people I considered to be top-notch modern day pulp writers. James Rollins was at the top of the list I passed along and BLACK ORDER reaffirms that choice beautifully.
Posted by Ron Fortier at 7:42 AM

Been reading Rollins for the last few years.

His early novels were all standalone. I felt he was a second-rate Cussler, as the plots were a little TOO farfetched. And not having a consistant cast of characters like other thriller writers were doing wasn't a good idea.

So I thought his Sigma Force novels were a good move. I think he's improved with them. The science is a little wonky, but so what. I know that some of his fans prefer the standalone novels, and since he recently did another standalone, maybe he'll go back and forth.

Other others you might want to check out: Jack DuBrul (mainly writes the Oregon novels with Cussler, but has a series of his own that good), Andy McDermott, and David Golemon.

Thanks for posting, MB. This isn't my first Rollins book, I read and reviewed AMAZONIA a few years ago and loved it. Another friend, reading this review sent me an e-mail stating Rollins once said in an interview that he loved reading Doc Savage pulps growing up. I can totally believe that, as the Sigma Team totally reminded me of Doc and his crew. Hell, one of Sigma guys is named Monk. As for DuBrul and the Oregon books, I actually have three of them on my To-Read stack. Ha. Just not enough hours in a day.