THE BOOK OF LIES 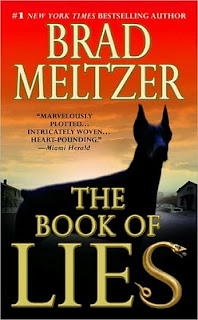 With what weapon did Cain murder his brother Abel? The first crime, as described in the bible strangely omits that particular detail, focusing instead on the moral outrage of the act itself. Could that unknown instrument still exist today? If so, it would easily become one of the most sought after prizes of the archeological community, not counting fanatical religious groups who would most likely imbue the object with arcane properties. This is only the first of writer Brad Meltzer’s outrageous plot lines in this convoluted thriller. The second is no less fantastic.

Calvin Harper works for homeless shelters in Ft.Lauderdale Beach, Florida. He and his partner, an ex-black minister, drive around the community picking up society’s forgotten souls and doing whatever they can to make their lives a little better. One night, in response to a police call, they find a man covered in blood from a gun shot wound, in a deserted park. That man is Cal’s father, Lloyd, whom he hadn’t seen in over ten years. Lloyd had been imprisoned for manslaughter, having accidentally killed Cal’s mother when Cal was only nine.

Which is where this pretzel of a plot twists again. It seems the bullet that wounded Lloyd Harper came from the same gun that in 1932 killed a Cleveland tailor named Mitchell Siegel. It was Siegel’s son, Jerry, who a few years later would create, with the help of his artist pal, Joe Schuster, the greatest comic book icon of all time, Superman. Once the details of this earlier crime, which was never solved, begin to surface, Cal finds himself lost in an historical maze of seemingly unrelated events.

Did someone actually discover Cain’s weapon? Did that same person kill Jerry Seigel’s father in 1932 and why are they now trying to eliminate Cal’s father? Like all decent thrillers, no sooner is Cal embroiled in this phenomenal mystery then he becomes a target of a psychotic killer working for an ancient occult secret society. From Florida to Cleveland, the Harpers race frantically attempting to solve the riddle at the same staying alive in the process.

THE BOOK OF LIES is a captivating flight of fancy that offers up wonderful moments of acute emotional insights into why we need heroes in an imperfect world. If you’ve ever picked up a comic as a kid and wondered what if, this book will pluck long lost musical notes in the attic of your memories. Give it a try, you might uncover something you’d thought gone forever.
Posted by Ron Fortier at 11:08 AM