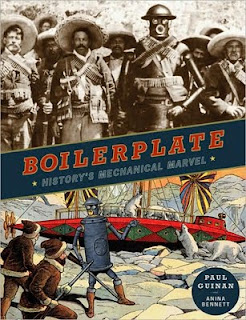 Bogus documentaries have been a comedy stable of the film industry for many years now. In 1983, Woody Allen, using state of art the trick photography, invented a fictional biography of a fellow named Zelig; a living chameleon who was present at some of the major political events of the 20th Century. The film was so flawless in its special effects it helped coin a new word, mockumentary. Later Roger Zemeckis employed the same movie magic interweaving the life of the fictional Forrest Gump with real, historical personalities such as John F.Kennedy and John Lennon.

Now, thanks to the amazing work of graphic artists Paul Guinan and Anina Bennett, we have this wonderful oversized coffee-table book detailing the history of the most famous mechanical man ever created, Boilerplate. Through the use of archival pictures, we are shown the histories of inventor Archibald “Archie” Campion and his sister, Lily, at the end of the 19th Century. Both siblings are pioneers for social revolution and deeply affected by the constant scourge of warfare that continues to take thousands of lives throughout the world in various global conflicts. Thus, in 1893, Archie builds Boilerplate to be a robot soldier, his dream being that one day governments will adopt his philosophy, and employ only armies made up of mechanical warriors.

In the process of promoting his grandiose vision, Archie and Lily travel the world with Boilerplate and thus find themselves intimately involved with some of the most monumental events of the late 19th and early 20th Century. From charging up San Juan Hill with Teddy Roosevelt and his Rough Riders, to saving the life of Mexican revolutionist, Pancho Villa and battling with Lawrence of Arabia against the Turks in World War One, Boilerplate and the Campions move through history in an amazing visual Odyssey beautiful detailed in hundreds of authentic (hmmm) black and white photos and colorful pictorial essays of the time.

The fun of this volume is captured on every beautiful laid out page and even though the entire conceit is adult make-believe, let me make one thing extremely clear, Guinan and Bennett have done their homework and the history they present framing their fanciful tale, is true and absolutely just as fascinating. You can read BOILERPLATE for the sheer audacity of its gimmickry, but will also come away with a vast knowledge of little known historical data that is nearly worth the price of the book itself. Now that’s a double treat for any real lover of history, bogus or not.
Posted by Ron Fortier at 8:58 AM