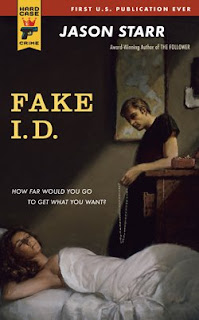 FAKE I.D. is a nasty piece of work and thus a delicious noir experience you will not soon forget. Powerful stuff.
Posted by Ron Fortier at 12:54 PM

Ron,
That car wreck analogy is perfect. I love this kind of stuff even though I know the protagonist (certainly can't call them "the heroes") are going to get it in the end. Allan Guthrie (Who says he loves David Goodis because Guthrie is "a sad bastard.") is another great. Check out "Hard Man." Violent, tragic, and just plain hilarious.

Got this one in the mail this week. Love the choice of first person narration here, especially for such a deluded lowlife.

Yup, me too, Frank. Starr has quickly developed a solid reputation as a real "noir" writer and this one is a classic in the making. It is just creepy how he gets into the head of the character from page one, so that we know immediately what a loser he is. But the poor sap hasn't got a clue. Brilliant writing.

Just got this book, haven't read it yet, seems decent from the review though