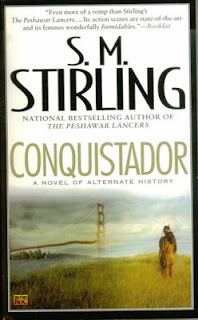 Where Stirling excels is in his action scenes. These are extremely well written, taut and suspenseful. The last section of the book, when Christiansen must fall back on his warrior training as an Army Ranger in the Iraq, is superbly handled and had me turning pages fast. CONQUISTADOR is a big book with big ideas and not something you want to pick up for a fast weekend read. It will demand a hefty investment of time. If you are willing to give it, you will be amply rewarded for the effort.
Posted by Ron Fortier at 12:46 PM