THE WOODS ARE DARK 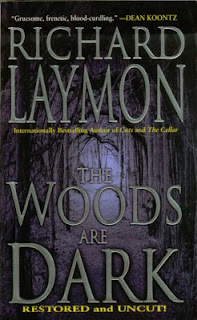 THE WOODS ARE DARK
By Richard Laymon
Leisure Fiction
215 pages

This horror book defines the term, page-turner. Sherri and Neala are traveling through woods to do a little hiking. The Dills family (Lander and Ruth, daughter Cordelia and boyfriend Ben) stop at small motel in a sleepy little off-road to rest. Within hours the six of them are kidnapped by the town’s people and taken into the deeps to be offered up to a wild savage clan of cannibals. From page one, I found myself gripped with an obsessive need to know what happened next. So masterfully is this suspense story told, it is virtually impossible to set down.

During his short lifetime, Richard Laymon wrote of the most gripping horror stories of our times and quickly amassed a devoted following of fans that included Stephen King and Dean R. Koontz. Sadly his work wasn’t discovered by American readers until after his death in 2001 when he won the Bram Stoker Award posthumously for his novel, The Traveling Vampire Show.

Laymon’s genius was depicting normal people, placing them in settings of pure terror and then allowing them to react truthfully. Unlike the characters who inhabit today’s gore splatter movies, who, when encountering cannibals in “the hills”, immediately start acting like idiots. Not so the characters in Laymon’s book. They fight back, for all they are worth, their primal survival instincts quickly overriding their civilized sensibilities. One of them to point of becoming even more demented than the savages themselves. It is a powerful and all too believable metamorphosis.

If you are in the mood for a good scare unlike anything you’ve ever experienced, then this is the writer for you, and THE WOODS ARE DARK is by far his horror masterpiece. But a final word of caution. Read it with the lights on. It will give you nightmares.
Posted by Ron Fortier at 5:54 PM

Haven't read this one yet but I love Laymon's work, esp. the traveling vampire show.

Barry, like yourself, I simply loved The Traveling Vampire Show and thought it one of the best horror novels ever written. Then I read this one and it immediately was slipped to #2. Ha. Sincerely THE WOODS ARE DARK is just plain outright frightening. Do not miss it.