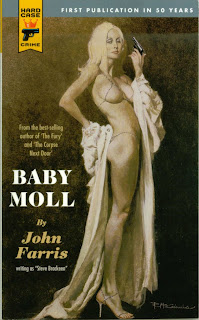 John Farris is a smooth story teller who writes with both economy and style. His protagonist is Peter Mallory, an ex-mob gunman who had thought his past was behind him. Now living in the Miami area, he owns a bait shop and is engaged to a lovely young socialite. Life is good; until the day that past comes knocking.

Mallory’s old mentor and employer, Boss Macy Barr, is being threatened by an unknown assassin from yesterday. Years earlier, running a protection racket, Barr had ordered a family run business burned to the ground when the owner refused to capitulate to his extortion demands. Somehow the man’s daughter survived and now, years later, has set about claiming her revenge her family by killing everyone involved with the fire.

Barr has turned into a feeble old man scared for his life. Mallory is the only person he trust to hunt down the mysterious killer and save him. Amidst Barr’s crumbling empire, Mallory must diplomatically search out a killer while at the same time avoid crossing paths with the other mob figures intent on inheriting Barr’s territory. Farris is excellent at propelling the story and offering up a few red-herrings along the way. There’s plenty of action and a powerful climatic finish that had me turning pages quickly.

This one has it all; sympathetic characters, tough as nails gangsters and several hot women who are twice as lethal as the men. BABY DOLL is a classic gangster novel by one of the best in the business. Don’t miss it.
Posted by Ron Fortier at 1:51 PM

Nice review Ron - I had no idea Farris started in the hard boiled pulps. One thing though, the title of the book reads Baby Moll but you refer to it as Baby Doll. Easy mistake to make for sure.

I just finished reading this, and I must be honest, at about page 190 of 217 I was starting to get nervous that there simply wasn't enough time to wrap everything up. Gladly, I was wrong, and a true climax happened quickly, uniquely, and only somewhat as I expected.

I also think he did a very good job of getting important details into several characters in a fairly short book.

Hi Jared, thanks for stopping by and sharing your thoughts. This was my own first Farris book and I hope to read more of him in the future.