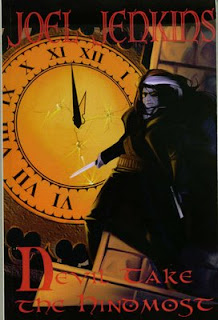 A few years ago an internet outfit called Frontier Publishing came on the pulp scene with several titles geared solely to old fashion action and adventure. Sadly they could not make a go of it and folded, but not before three of their best writers got together and founded Pulpwork Press. One of these was Joel Jenkins and this book was a product of that new venture.

In the metropolis of Denbrook, Damon St. Cloud is an investigative reporter looking into City Hall corruption that leads all the way to the mayor and his cronies. St. Cloud’s prying eventually threatens the wrong people and he returns home one night to find his wife and son butchered, their bodies torn to pieces, the house painted in their blood. St. Cloud, mentally unhinged by the experience, disappears and the prevailing rumors are he either died or ended up in a sanitarium. Both suppositions are miles away from the truth. After distancing himself from the horror foisted on him, St. Cloud comes to the startling conclusion that his family was murdered by vampires secretly in the employ of the city fathers. Knowing he is ill prepared to deal with them, he goes into self-exile, traveling the world’s exotic locales to amass the arcane knowledge he will need to fight these blood-sucking demons.

DEVIL TAKE THE HINDMOST begins many years later with Damon St. Cloud’s returns to Denbrook and the hell he brings with him. Armed with both knowledge and state of the art weaponry, he soon begins dealing cold, ruthless vengeance on the vampire clans of Denbrook single-handedly. He is a tireless, fearless angel of retribution and soon those responsible for the deaths of his family are not so self-assured of their invulnerability.

This is pure purple-prose at its frenetic best. Jenkins creates marvelous characters, good and bad, who populate his story and move it along with a razor sharp pacing that never lessens. His action sequences are among the best I’ve ever read. Currently books starring vampire hunters are very much in vogue, but very few of them pack the wallop this book contains. You can find it here (http://www.pulpworkpress.com/apps/webstore/) Tell Pulp Fiction Reviews sent you.
Posted by Ron Fortier at 11:16 AM

Great review, Ron and I'm glad you enjoyed Joel most excellent book. It's one that I think is among his best and I hope it finds the readership it deserves.

I just wanted to mention that the doom haunted city of Denbrook is the creation of one Mike McGee, one of the most talented and creative writers it has been my pleasure to work with. Mike created an entire bible of the city of Denbrook to work with and there have been at least four or five novels written by various writers set in that city, including my own DIAMONDBACK.

Any more information on the city of Denbrook and how to read those other novels set in that city, please feel free to contact me at DerrickFerguson1@aol.com

Derrick, thanks a million for filling in the background on McGee
and the super work all of you did
with Frontier Publishing. I do urge
all Pulp Fans to seek out Pulp Works and the wonderful books you guys
are doing. All great, modern pulps.