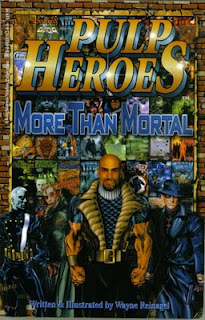 Now the only critique here is the same that applies to all pastiches. If you aren’t familiar with the originals upon which these clones are based, you are simply not going to have a clue as to what is going on here and or who the hell all these folks are. That’s a big Achilles to any book and it’s unavoidable. So, if you aren’t familiar with the Shadow, Doc Savage or the others, I would strongly recommend you find some decent reprints and discover the fun of pulps. You’ll be happy you did. Then come back to this truly amazing book and buckle up for the ride of your life. This book is a roller-coaster of action adventure that packs more thrills than any other five modern thrillers combined. It’s a grand literary achievement and I tip my fedora to Mr. Reinagle for pulling it off so magnificently. Pulp enthusiasts are going to adore this book.
Posted by Ron Fortier at 12:51 PM

I've read a good chunk of this book already, and it is indeed quite a fun ride. I recommend it to pulp fans who love the classic stuff and want more of it!

You got it, Van. The book is huge because it tells a whopping BIG STORY. One no real pulp fan should
miss.

Thank you forthe heads up on this!
I've been looking for a good epic pulp for a long time. Ordered it yesterday and look forward to reading it.

Thank you forthe heads up on this!
I've been looking for a good epic pulp for a long time. Ordered it yesterday and look forward to reading it.

No sweat, Kathulos, and thanks for stopping by and reading my reviews.
Epic is certain the operative word here in describing More Than Mortals.
If you like wild and wooly pulps,
you are in for a treat.

I picked this up from Amazon when it came up after I bought a Phantom Detective reprint -- reviews looked good and I was most impressed by the very slick cover art by Reinagel. Lo and behold, it came with a multitude of book marks and postcards reproducing many of the fake pulp cover illustrations that he created for the book. I'm up to page 299 now and, despite some infelicities ("Dr. James Hamish Watson" and too much infodump in places), I am enjoying the journey. Very strongly influenced by Phil Farmer's Wold Newton work, so this is also a good way to salute the passing of PJF.

Right you are, Stu. Wayne clearly had a copy of Farmer's Wold Newton
mythology and he employs it heavily in this homage to the pulp heroes.
I would imagine Farmer influenced dozens of today's pulp writers with his amazing imagination.