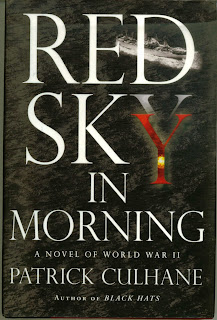 As a post-war baby-boomer myself, I often listened to my late father’s stories of his years in the South Pacific as an anti-aircraft artilleryman. I know he would have loved this book as much as I did.
Posted by Ron Fortier at 3:36 PM

Your descriptions of the books you review always make me want to run out to the bookstore/library and get 'em right away and this is no exception. I'm putting this on my Must Read List. Great review!

Thanks a million, D.L. I'm flattered by your comments and delighted to know that I'm doing my job here. I honestly love reading, and when a book of this caliber comes into my hands, I honestly want to share it with as many other readers as is humanly possible. Do me a favor, please. When you do read RED SKY IN MORNING, let me know personally what you thought of it.

Anonymous said...
This comment has been removed by a blog administrator.
10:38 PM