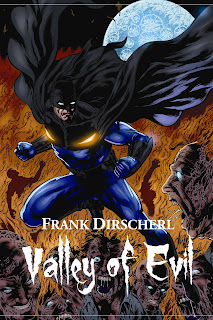 In the past five years there has been a tremendous resurgence in pulp fiction centering on the old heroic pulps. Young writers have started taking up the mantle of old masters like
Walter Gibson and Lester Dent and begun creating their own avengers in tales of genuine purple prose. Among the best of this new generation of wordsmiths is Australian, Frank Dirscherl and the exploits of his modern pulp paladin, the Wraith.

OF is the second novel detailing the crusade of this macabre vigilante against the criminal forces that threaten the good citizens of . In his first adventure, the Wraith battled a mysterious fiend named the Cobra and vanquished him soundly. As this second adventure begins, a new threat arises even deadlier and more insidious. Someone has created a plague of epic proportions and randomly unleashed it. Thousands are dying in the streets of the city and officials are powerless to stop it. Enter the Wraith and his two devoted allies, Max, his mechanic and genius inventor, and Leena, his gutsy girlfriend, who knows no fear when fighting by his side.

As the plot moves along, the Wraith discovers the villain behind the plague is none other than the beautiful Natalya Blackova, the Cobra’s chief aide, along with his former enforcer, the deadly Magnus Khan. Now it is up to the Wraith to find Blackova and Khan and stop them before they destroy the city he has sworn to protect.

Of all the classic heroes, Dirscherl clearly emulates the action-packed tales of the Spider and chronicled by the late Norvell Page, as his plots are always bombastic, over-the-top disasters where the body counts add up faster than the average reader can keep count. The atmosphere is moody, the action relentless and the villains always meet the fates they deserve at the hands of our warrior hero. is no exception and wonderfully carries on this pulp tradition without reservation.

My singular quibble with the Wraith adventures is they occur in modern times and that is always an awkward fit, a 1930s hero operating in today’s computer saturated environment. Note, the pulps were never about logic and most of them ignored mountain size plot holes for the sake of action and melodrama. In reading a pulp, you accepted these flaws for the benefit of the ride. The Wraith’s setting just make that road a bit bumpier than it should be. It’s a venial sin I’m all too happy to forgive in lieu of Dircsherl’s writing. This is grand pulp!

Hi there, I just stumbled into your blog here. I wrote a vigilante fiction book about a psychologist that cracks an online pedophile network in Patong Beach, Thailand. If I sent it to you in PDF format, and you found it interesting - would you review it? Mike Fook (at my name dot com)

Hi, Mike. Your book sounds fascinating, but I cannot review digital books. I require hard copies. My eyes are simply not up to staring at a PC monitor for hours on end. If you have a such, please send it along and I'll gladly review it.